View my other patterns HERE 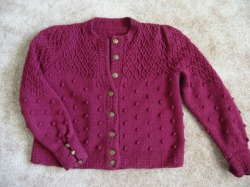 Bind off 7 sts at beginning of next two rows, beginning English Quilting on second row (wrong side). P2, then start row 1 of English Quilting, ending with p1. Continue in pattern, decreasing 1 st each side of every right side row 7 times (69 sts). Then, work even in English Quilting until peice measures 21 1/2 inches. Bind off 22 sts at beg of next row, place next 25 sts on a stitch holder, then bind off last 22 sts with another strand of yarn.

Cast on 65 sts. Work in Little Tent Pattern for approx. 3 inches, ending with row 4. Rep row 1 again. Continue to work 17 sts along button/buttonhole side in Little Tent Pattern all the way up the front, At the same time, purl next 4 rows, then work in stockinette stitch for 4 rows same as back. Place bobbles alternately same as for back, working until piece measures 13 inches. Shape armholes respectively same as for back, then work even until peice measures 19 1/2 inches. Shape neck: Place 17 sts of neckband (Little Tent pattern) on a st holder. On next row, bind off 6 sts, then dec 1 st neck edge every other row 6 times. Work even until piece measures 21 1/2 inches. Bind off.

**Note: When making right front, be sure to make two button holes in center of little tents so that when it is folded over for facing, buttons will be able to go through both layers.

Cast on 49 sts. Work in Little Tent Pattern for approx. 3 inches, ending with row 4. Work row 1 again. Purl next 4 rows. Working in st st, increase 1 st each side of every 5th row 18 times. At the same time, work bobbles in same as for back. ** At the same time, when 42 rows have been worked (from beginning of st st), start English Quilting as follows: On wrong side, p32, (yo twice, p1) twice, p 29. Follow English Quilting pattern as directed, increasing the lattice outward by doing the 2 double yarn overs at each outside edge, forming an upside down triangle. When all the increase are done (OR piece measures 18 inches), there should be 12 sts on each side of the lattice at this point and 84 sts on needle.

Bind off 7 sts at beginning of next two rows. Work even in English Quilting for 6 inches. Make gathers as follows: k2 tog across next two rows, binding off on last row.

Fold front facing to inside, folding Little Tent pattern in half, and tack to inside of fronts.

Sew on buttons to correspond with buttonholes along front

On sleeve bands, make loops for buttons with D crochet hook by chaining 8 then tacking to center of sleeve band -- one near the bottom, one on the garter stitch at top of band, and one in the middle. Sew buttons far enough away to fit wrist snugly.