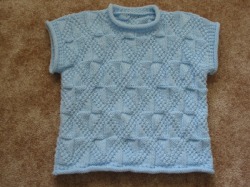 Work same as back until piece measures 19 inches. Bind off center 18 sts for neck. Working one side at a time, dec 1 st at neck edge every row 4 times, then work even until it measures 22 inches from the bottom. Bind off.

Sew one shoulder seam, then pick up 72 sts around neck with smaller needles.
Row 1: k1, p1 across.
Row 2: knit
Repeat these two rows twice more. Purl next row and coninue in stockinette stitch for 4 more rows. Bind off.

Sew other shoulder seam and neckband.

Measure down 9 inches on each front and back from shoulder and place a marker. With smaller needles, pick up 68 sts between markers for each armband. Work same as for neckband.

Sew side seams and ends of armbands together.