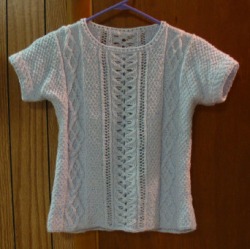 Work in set pattern until piece measures 12 inches. Start sleeve shaping: Inc 1 stitch each side of next 4 right side rows. Work one row even.

Cast on two sts at beg on next 18 rows (138 sts). Once all sts have been cast on, work in a four-stitch cable at each end as follows : A purl stitch at the very edge, then the four stitch cable crossed every fourth row, p1, k1. (Pattern will be reversed on opposite side).

Work even until piece measures 21 inches, and ending with row 1 of Honeybee pattern. Bind off 51 sts at beg of next two rows and put center sts on a stitch holder.

Armbands: Pick up 62 sts at bottom of each sleeve and work same three rows of neckband.

Sew side and sleeve seams.