If you are interested in purchasing the original model (newborn size), it is available for $95.00  USD. This would include shipping costs (at this time can only ship to locations within the contiguous United States). I can only offer returns if the purchaser pays the return shipping as well as my original shipping costs.  Please contact me at lambknitj@juno.com if you are interested in purchasing the model, and I can arrange for purchase through Paypal. 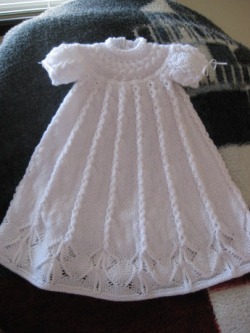 Download File
Difficulty Level: Experienced (use of short row shaping, and herringbone braiding – but don’t be afraid to try it, as I have tried to explain how to do both in the instructions).

Inc – increases are made by purling into the front and back of a stitch.

Work Herringbone Braid (using two strands of yarn – these get very twisted together as you work, so it’s a good idea to pull loose strand past attached strand every so often to relieve the twisting):
It is worked as follows: knit 1st stitch with attached yarn, then knit 2nd stitch with cut length of yarn you set aside. *Bring attached yarn underneath cut yarn and knit next st, bring cut yarn underneath attached yarn and knit next st, rep from * across.
Repeat on next row, except purl each stitch instead of knitting – continue to bring yarns from underneath on each st.
Drop extra strand of yarn at end of second row.
Increase Row: (p3, inc in next st) 3 times, (p4, inc in next, p3, inc in next) across, end p4. (157 sts).

Split into Backs, Front, and Sleeves:

Work across, repeating row 1 over next 24 sts (don’t forget to count the slipped sts that are passed over the others – they still count in the stitch count!) These sts will be the Right Back. Break yarn, leaving a long tail, about 1 yard.

With long tail from Right Back, pick up 6 sts from underarm of sleeve just worked, then work across next 51 sts for Front continuing with Row 1 of Pattern Setup. Drop tail.

Joining and Increase Row: Using Cable Cast on, cast on three sts. Place a marker. *k3, inc in next, p4, inc in next; rep from * around to marker (EXCEPT!!!! Skip one inc at each underarm to make patt even at  with 7 sts between each cable).
Do not turn. Slip marker and continue. 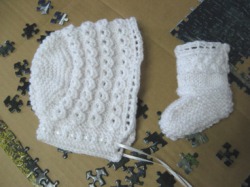 Repeat rows 1-4 until piece measures 12 inches, ending by working row 1. Bind off on wrong side.

With right side of bonnet facing, pick up 45 sts along bottom edge of bonnet between eyelet rows.
Knit 3 rows.
Eyelet row: k1, (yo, k2 tog) across.
Knit 2 rows.
Bind off knitwise on next row.

Cut a 24-inch piece of 1/8" wide ribbon and thread through eyelets at bottom of bonnet.

Work in set pattern until piece measures 5 inches (or width of top of bootie).
Bind off.
Sew cable to top of bootie with eyelets at top of bootie, using mattress st.
Sew back seam and sole .